Do Dogs get Jealous?

It seems like a no-brainer, right? However, jealousy seems like such a complex emotion, that scientists conducted an experiment to determine if dogs are actually capable of true feelings of jealousy. After all,  it’s possible that what we commonly interpret as jealousy is nothing more than basic territorial or possessive behaviors. Jealousy… true jealousy…. is the pain felt after discovering that the attention you desire is being given to a rival. It can be a very damaging emotion, and can result in very dangerous behavior.

For this particular study,  several dogs had to be practically ignored by their owners. The owners, while ignoring their pets, had to display their attention and affection on three objects – a book (which had to be read aloud), a jack-o-lantern (which they were to praise and pet), and a mechanical dog that would bark and wag its tail (which got affection and praise, like the jack-o-lantern). Guess which object got the most hate…. 😉

Yep, you got it –  the more easily the object could be seen as a “rival”, the more aggressive and extreme the dogs would be in their behavior. The poor toy dog got his share of growls, nips, and even bites.

Conclusion?  Jealousy is a “primordial emotion” – complex brains are not required to experience it, and many animals can feel the same green-eyed monster that humans can. 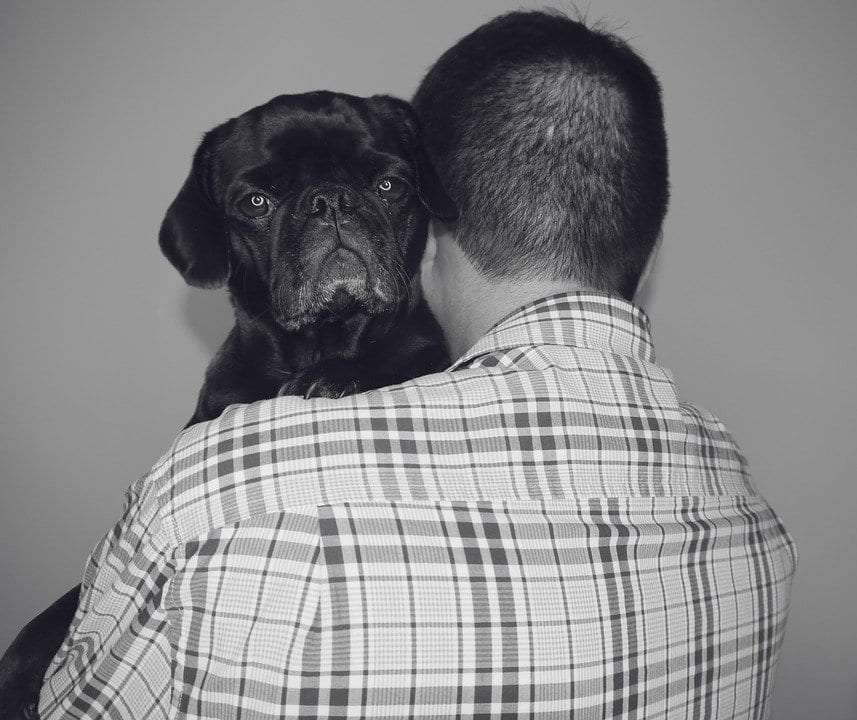 How Can I Tell My Dog is Jealous?

Symptoms of jealousy are pretty easy to identify. But once you identify the behavior, you can use it to understand your dog’s point of view. Knowing the ‘why’ is crucial for addressing the “what” of the problem properly. Letting it go unchecked can be problematic, and even dangerous, later on down the road.

Peeing / Pooping on the Floor

If your dog is housebroken, but seems to always have an “accident” when company comes, you may have a jealous dog.

If not just basic territorial behavior or a fear reflex, it could be their best way of getting your attention – even if it is negative attention.
In the canine world, it’s far better to be reprimanded than to be the outcast. And what better way to suddenly have your focus if nothing else will work?

Climbing in your lap, nuzzling your hand, licking your face… all because your spouse walked in the door. Sound familiar?

Dogs are pack animals that have an understood hierarchy. Since you’re “top dog” to them, they want to be most important to you. Putting themselves in your face makes them seen, and makes the rivals see them next to you.

Your dog simply can not allow your hands to pet another. This is the dog shoving himself to the forefront, under your hand. They may push or nudge other dogs away. They bark at strangers.  Maybe they stand between you and a perceived “rival”.

They are saying, “This human is my human. And their paw, and their look, and their noise is for me.”

Barking at visitors, growling, snarling, or getting into a fight with another pet.

This may especially be an issue in a multi-pet household where pets are competing for their owner’s attention and resources.

Sometimes when our dogs get mad, they may have a tendency to withdraw, bark or whine. They may “sulk” with silent scorn. Ruling out fear or anxiety, they may just want their upset noticed but can’t be bothered with begging for fighting for your attention.

You’re trying to have a conversation with your neighbor, when all of a sudden, Princess is pulling out the stage. Prancing on hind feet. Rolling over. Suddenly wanting to shake with you. This is a surefire sign that your pet is trying to get your attention away from something else.

This can often be in the form of biting or nipping at the other animal or person getting your attention. Dogs may aggressively bark, nip, or growl when owners are greeted or visitors arrive – especially if you hug them..

Despite how cute it may seem, don’t laugh or reward them with the attention they’re demanding. Cross your arms. Turn your back. Ignore their grumbles. Make it clear that in this den, your pack shows respect.

Every dog should know three basic commands – Sit, Stay, and Leave It (waiting for permission before eating). These lessons establish your dominance as leader – which is the best way to avoid problematic or aggressive behavior from your dog.

Train your dogs to feel safe in their crate so they can feel relaxed during their “time out” period. Try to ignore your pets when you first arrive home so they don’t feel like one is getting more attention than the other. They’ll calm down in a few minutes, and not be so intent on being the center of attention.

Don’t pet one dog at the expense of the other -try to give everyone equal attention.  If necessary, limit your access to only one pet at a time, so they can learn that everyone will get a turn of their own with you.

Have at least two of all toys and beds, but remove food-based toys unless supervised. Feeding pets separately, or in different locations can help to avoid conflict during mealtimes.

Teach Them to "Get Along"

Have your spouse be the good guy who will take them on a walk. Toss them a treat for patiently waiting while you welcome the kids home from school. Basically, we are telling them, “When this person comes around, great things happen!”

“Catch” them being good – give them attention and praise when they are acting the way you want them to. It saves them the anxiety of guessing what you want, and the hurt of being scolded when they got it wrong.

“A tired dog is happy dog” – meaning that a dog who is exercised and active is less likely to show pent up frustration, aggression, and anxiety. Physical activity is crucial for your pup’s mental health.

Be Patient, But Don’t let things get out of hand…

Keeping a list of the triggers you notice (as well as your dog’s negative reactions to them), can be useful in correcting behaviors that you cannot manage on your own, should you need to consult a vet or dog trainer.

As always, we would love to thank the great people at Pixabay, Pexels, Canva and Unsplash for their beautiful, free images.

Not ready to hang up the leash?

You can ease their pain for just around $1 a day.  More walks. More memories. More freedom. They're worth it.

or Buy from Amazon >>

← 5 Signs of Lyme Disease in Dogs

Sharing this post helps our available foster dogs get seen and adopted. Thanks for being a dog lover!